We all have wondered “How and when were we named?” The chances are that a lot of us probably know the answer. The reason we can say this is because a lot of Nepalese follow a ceremony called “Nwaran”. Now if you don’t know what this ceremony does this is a ceremony that is solely dedicated to naming a child. As with all ceremonies that we Nepalese follow, this too has its own value and process.

Today we will be focusing on the process that is followed during “Nwaran”. As for the values and significance of “Nwaran”, that is a whole topic on it itself which we will be covering separately.

As we mentioned “Nwaran” is a ceremony that is dedicated to naming a child as per Hindu Culture in Nepal. You do have to consider that since this ceremony is followed in a lot of Nepalese culture and traditions so the details may vary a bit. So here we will be focusing on the processes that are followed by the Brahmins of Nepal.

On what basis is the child Named as per “Nwaran”?

A question that comes to our mind now – after we know what Nwaran means in a general sense- is “On what basis is a child named after”. After all the child has to be named on some basis right? Well, according to Hindu Culture, a child is named on the basis of four things which are Nakshatras, Time, Date, and Place of childbirth. Let’s get to know these technical terms here.

Nakshatra in basic terms is a division of the sky according to Vedic Astrology. There are 28 nakshatras (27 in some cases) in the sky and each nakshatra lasts for around 53 minutes.

This is the time when the child is born and the time of birth is used to determine the nakshatra of the child.

As you may have guessed, this is the Date of Birth of a child, and while this is more or less optional information knowing the date of birth will make it easier to determine the Nakshatra.

This is the place where the child is born and while not as important as the ones so far is relevant after the initial phase of the Nwaran as the name of the child should be appropriate for the place s/he is born in. While this is not an absolute necessity, if a child is not named appropriately they are going to face difficulties in their earlier phase of life.

What do we need for the process of “Nwaran”?

“Wait, we need something more than the basis of Name for this ceremony which is literally called the naming ceremony?” A question that may have popped in the mind of some when you saw this part. Well, yes and the reason for this is that “Nwaran” is a naming ceremony after all and we should not forget the ceremony part of Nwaran.

While the Basis is indeed all that is needed for the practical aspect of naming the child, for the ceremony a different set of ingredients is needed. This is because of the cultural and religious aspect of this process since this process is more or less a combination of different Pujas and a Hawan (which literally means worship or offering).

What is the process of Nwaran then?

That was a long list and looking at all of the materials required for Nwaran,  some of you may think that this is probably a complicated process. In case you are thinking that you are absolutely right! This is indeed a complicated process but the good news is that we don’t have to understand them in detail as this is the job of a Pujari.

Instead of that here we will be focusing mostly on two alternate processes rather than the core process. The good news about that is that we don’t really have to understand nor remember all the ingredients and the whole process as one of them doesn’t even require the assistance of a pujari at all.

The other one however does require the assistance of a pujari but the process is rather a simple one. Before we learn about the easy processes though, let’s see what the long process is in short, shall we?

Short description of the Core process

The core process of the Nwran is more or less a spiritual one. Since the Hindu religion has tons of gods and goddesses if one were to worship all of them the worshipping would last till eternity. So just like every ceremony within the Hindu culture, this one too worships a few relevant ones. The core process of “Nwaran” can be categorized into five sections.

The Alternate Processes of the Nwaran

Just by looking at even the short description of the core process, we can understand that it is a bit too complicated for common people like us. Thankfully we have, as mentioned, two alternate processes that are simpler by our side. 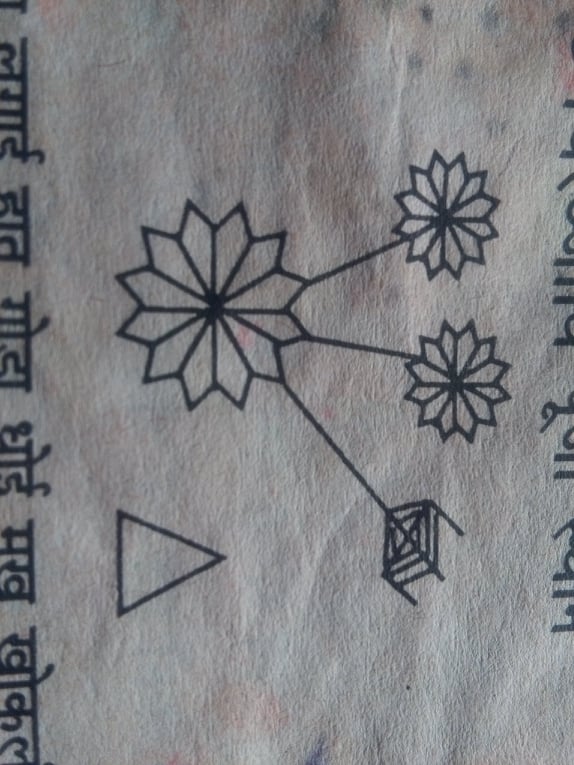 The Alternate process that requires the assistance of a Pujari

This process is still a bit complicated as it is basically the same as the core process just a bit shorter. We still follow the purification process but instead of worshipping all the gods and goddess required for the Nwaran, we only worship Oil lamps (दीयो), Lord Ganesh and Kalash (कलश). We do have to make the whole mandala and all though.

While this may not seem to make much of a difference on the surface it actually does. Not only does it save a lot of time this also saves a lot of effort and time that would be spent in the Hawan but to some extent cost as well. Since the things that one has to do in this process are comparatively less it is a bit simpler to understand as well.

Regardless of how short and simpler, this process is this is still a complicated one for us normal humans who don’t have much idea about the deep rituals of the Hindu religion and traditions. How well we understand this process completely depends on how versed the individual is though.

The alternate process that does not require the Pujari Directly

As you may have guessed this is something that one can do without the assistance of a Pujari at all. This is also the simplest of the process. The reason for saying this is because the only thing that you have to do is get Baby’s astrological starting letter from an astrologer who practices Vedic astrology.

After that, the only process you have to do is to write the details down on the back of a Peepal leaf. You can either keep the Peepal leaf or depending on the location, let the leaf go with the flow of the river as a ritual so the choice is yours

The next thing that you have to do is to whisper the said name in the ear of the baby and the process is completed. You do have to contact the Pujari and ask him/her to do the puja on your behalf though.

How much does it cost for the “Nwaran” ceremony?

After all, is said and done, the final barrier is money in the modern world after all. While one may be willing to do this ceremony if one is not familiar with the process they can get scared of it. After all, it does seem to be pretty expensive from what we hear.

Well, the good news is that it is not as expensive as we think. All we have to pay for is the ingredients which can be bought with a few thousand and the fee for the Pujari and the Puja itself.

Now in the olden days, the change for the Godan used to be 17 paisa which is the same as 0.17 rupees. As the time changed and the significance of the paisa decreased the fee has increased as well. In the modern days, Godan can be done within the range of 55,105,110,500 or 550 Rupees.

As for the money charged by the Pujari, they usually charge the sum which is equivalent to the daily earning of his client. This means that the price entirely depends on how rich you are. While this is the custom the principle of the Pujaris differs but the average estimation of the money we have to pay for their work is roughly around 5000 for the average middle-class family of Nepal.

Is there any Relevance of this whole process in Modern life?

The short answer to this question is that it entirely depends on how religious you are and how much you value the cultures and traditions. In modern life, it doesn’t really matter who named you or what basis you are named after but knowing that your name came after a complicated process that had a method and relevance does come with some assurance. The assurance being that your name was not a random fluke and was kept with consideration.

After going through all of that, in the end, we can more or less say that “Nwaran” is an essential part of every child born in Hindu culture. This may not seem that important for a lot of us but considering that a lot of Nepalese are Hindu, it is important. Along with this since we are finally considered as an individual and not just “his or her son/daughter”  or things like “nanu” and “bunu” after this moment.

Read also: Why You Must Keep Your Nwaran Name Secret?

How joyous Pandit Guru Ji does Nwaran as your Family

How Rashi is Different from Western Horoscope